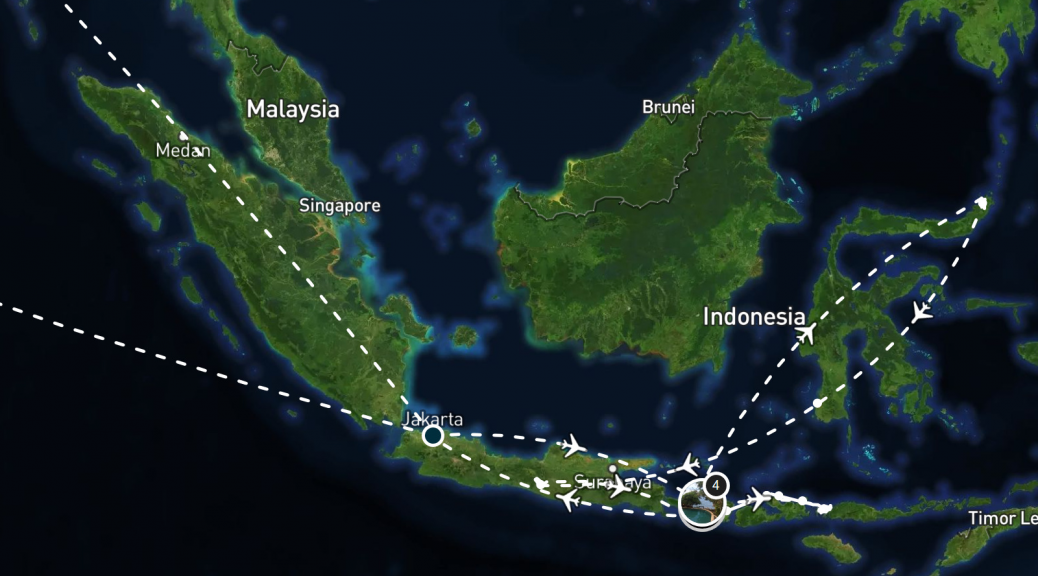 Truck-the-world’s expedition truck was not allowed to enter Thailand due to Thai DLT regulations effective 1.1.2017. Since Thailand is transit country for Malaysia and Myanmar we skipped this leg for now.

Instead, we took a break from trucking but backpacked 11 of Indonesias islands during late 2017/early 2018 including Bali, Lombok, Sulawesi and Java by air and visited Flores, Rinca, Komodo, Siaba Besar, Sumbava, Padar and Medang by boat.

Indonesia is one of the most beautiful and friendly of about 100 countries we have visited so far, an insular state with 17.508 islands, 6.044 of them inhabited. Beautiful nature, wonderful seas, magnificient beaches, wildlife and fruit all over. People are poor in terms of money but rich in terms of life, full of energy and exremely friendly, laughing and easy going almost most of the time. Maybe integration of Muslim, Hindu, Christian, Jewish cultures may provide benefits like tolerance, freedom, understanding, happiness?

Major drawbacks, however, exist with terrible pollution across land and sea with plastics all over and even the beaches if not cleaned by individuals. Terrorism is reported anywhere almost every week, not to mention corruption.

Volcanic and seismic activities are reported daily for many places in this centre of the Pacific Ring of Fire with movement and collisions of lithospheric plates.

Bali’s Mount Agung was always active during our travel time but never caused major problems up to date. A safety zone around the crater was established and residents had to leave it. They lived in camps around Mount Agung being supported by National and International Humanitarian agencies. Bali and Lombok airports were closed because of smoke several times but reopenened again soon with the consequence that only a few tourists were arriving.

A few months after we had left Indonesia, Lombok was hit by a severe earthquake and Mount Rinjani eruption killling 500 people and destryoing major infrastructure. Almost all hotels and restaurants were and still are closed, a major impact for people earning their living with tourism.

Same happened to Sulawesi after we had left, earthquake and Tsunami killed more than 1.500 people and destroyed most of the infrastructure in Central Sulawesi. In Northern Sulawesi Mount Soputan close to Tomohon erupted.

We took Garuda Frankfort-Amsterdam-Jakarta-Lombok with a boring stopover in Jakarta and spent a week in wonderful Puri Mas resort close to Senggigi at Lombok West coast. We watched active Bali’s Mount Agung being 2 of 7 guests, 50 would be standard during high season.

We took an express ferry to Bali’s East Coast and spent another week in several locations at Bali North, East and South coast. We met extremely friendly people, easy going, helpful and always ready for ceremony.

…was recommended to us by friends. We flew to Manado in Christian Northern Sulawesi and spent Christmas at Gran Luley**** hotel by the sea. Pool was due because swimming in the open sea was never recommended.

Next stop was Java’s Yogyakarta by air for its Pubs and Buddha- and Hindutemples.

On our way to Flores island we had another stopover in Bali.

We took a flight to wonderful Flores Island just North of Australia, quite lonely, natural and Christian. In Flores we booked a 5-day-trip back to Lombok by ship together with other European Tourists with full pension and accomodation onboard the ship together with a nice captain and crew.

We arrived at Lombok Port by microbus and chose Puri Mas Hotel again for our Good Bye to Indonesia.

Shortly after leaving Indonesia several earthquakes and Tsunamis occurred in Bali, Sulawesi and Lombok. As a consequence Lombok tourism went down and Puri Mas Resort was closed like almost all Tourist hotels and restaurants.